Lately, I've been exploring a new font catalog... Hello Font.  They are specializing in Vector Fonts!  These are really ultra cool.  These fonts are the coming thing, right now.  I'm still trying to figure it out, but I want to make My own.  These Vector Fonts can be made pretty easily in a program such as Illustrator (if you know Illustrator), and I love Illustrator.

But I am still trying to get a handle on these Vector Fonts.  So, if you have any pointers or resources to share, please let Me know.  I can see that I have a lot of studying to do, but I am looking for all the recommendations I can get so that I don't have to wade through the junk.  ;)
Posted by Doug Peters at 1:45 AM No comments:

I am pleased to announce the latest of My fonts: Milton Serif Bled Medium version 4 is a hand printed serif that allows an elegant sloppiness in typeface, as it tries to conform to the likes of serif print fonts in handwritten form.

Milton Serif Bled is free for personal use (not for commercial use without permission from the artist... Me).  No derivative works should be based on this font, but otherwise it can be redistributed in its original distribution archive form.

Milton Serif Bled has an extremely robust character set that should make the entire western world happy.  I have included characters specifically used by Czech, Duetsch, España, Français, Greek, Italiano, Polski, Scandinavia, Turkish, Cyrillic, Ligatures, Math and extra Punctuation.  Counting them by hand, I come up with over 400 unique characters (each letter, accent and puntuation mark is redrawn with no copy and paste between letters/accents/punctuation).  Greeks may get a little ticked because My logo replaces the Captal PHI, but the Cyrillic EF character is identical.  I'll fix that in the next release. 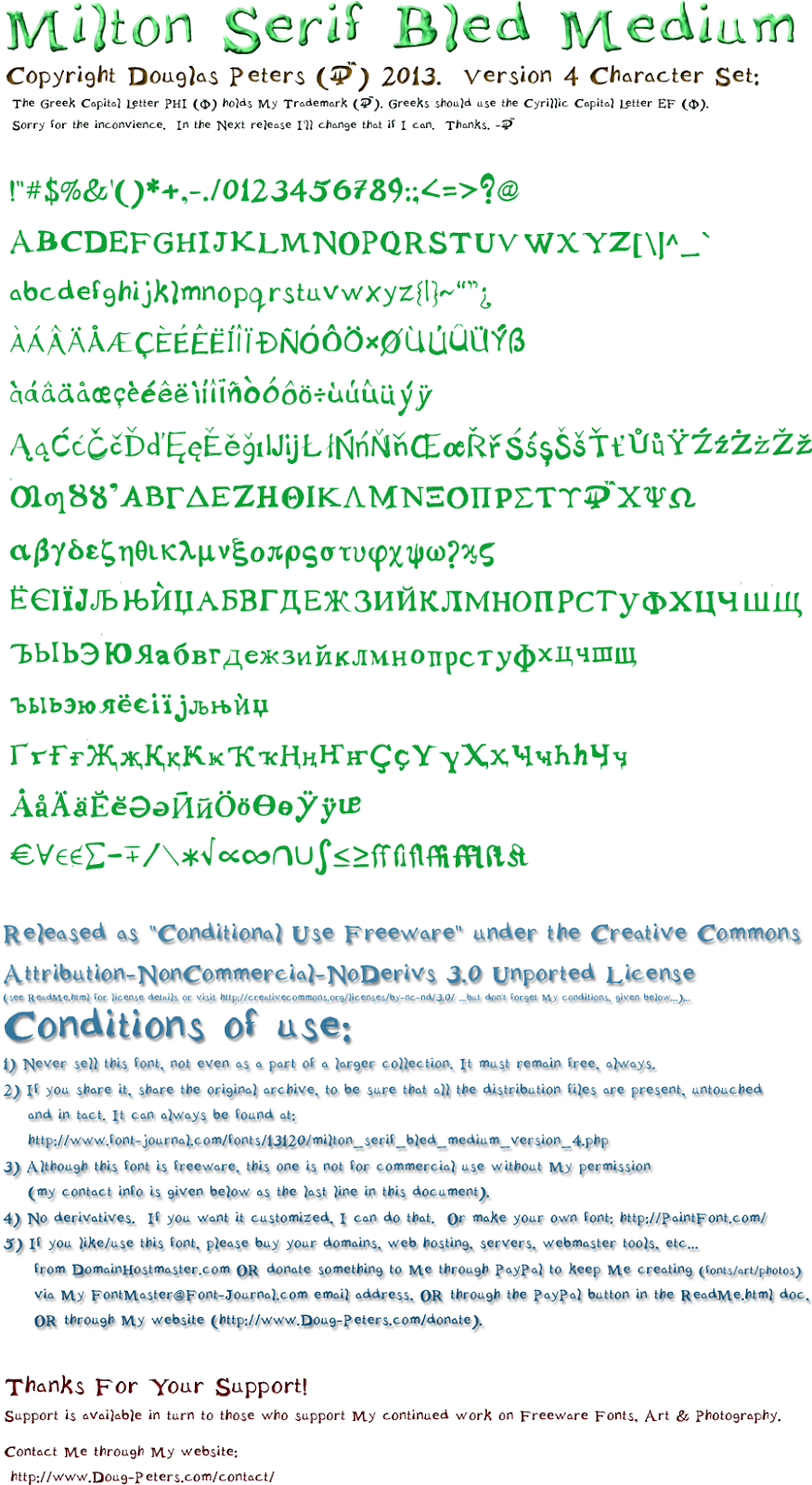 The original official distribution archive is available from Font-Journal at:
http://www.font-journal.com/fonts/13120/milton_serif_bled_medium_version_4.php

I hope that you will find it useful for your personal projects and use!  -Doug Peters
Posted by Doug Peters at 5:24 AM No comments:

Create & Enhance Your Own Fonts, Free!

Due to unforeseen circumstances, I had to take a real hard look at My business.  The long and short of it is that as a web designer I only had a couple of the most recent sites that I have done in My portfolio, after over 14 years as a web designer.  I would design sites that the client would effectively ruin.  And once it was delivered, though proud of what I had managed to do despite the fact that they refused to listen to Me, they then managed to destroy it over time, or the business and website would go down, never to return (probably because they didn't listen to good, sound advice in the first place.  Then the economy slowed way down and our conservative Dakotans stopped investing or doing new advertising a couple different times, and I had to take other work twice.

After hurting myself at one of my so-called "part-time" jobs (tripping over a "safety feature" that is more dangerous than safe), most of My business was halted because I was either I was just too tired from unloading truck or just in too much pain to think.

But I have always wanted to design fonts.  For a couple of years now, I have been trying to run a Freeware PC TrueType Fonts website, Font-Journal.com.  The thing about designing a font is that although you can use valuable critiques from fellow peers as well as constructive criticism from the general public, no one is going to halt the project unless you do it their way.  No one is going to pick out the worst off all design mock-ups presented, because it's just you in charge, and you are responsible for your own work.  And you can be proud of it because you don't have an ass with no art education second guessing your every comment and over-riding your decision despite the logic.

I once worked on a website that was going to be the shining example of true optimized, best design practices using the industry standards of HTML5 and CSS3, and this guy took out all My code and put the presentation on tables! -Talk about CRAP Design!

There just isn't helping some idiots.  But the worst part is that he was a web design friend that fell behind the times and refused to trust Me.  Some friend.  Some designer!

I have been growing more and more tired of working for know-it-alls that think they know better when they are just hurting themselves, repeatedly, never learning, never advancing.

Then just lately, as I rest up My hip, I have found some great resources for anyone to design their own fonts, free of charge...

I plan to add more cool font tools as I find them, as well as announce My own font creations and highlight cool fonts.  For now, I hope this is enough to get you interested in the art of the font, and possibly started on some of your own creations.  It's always cool to hand a client a font used to produce his logo, perhaps with a version of his logo in it.